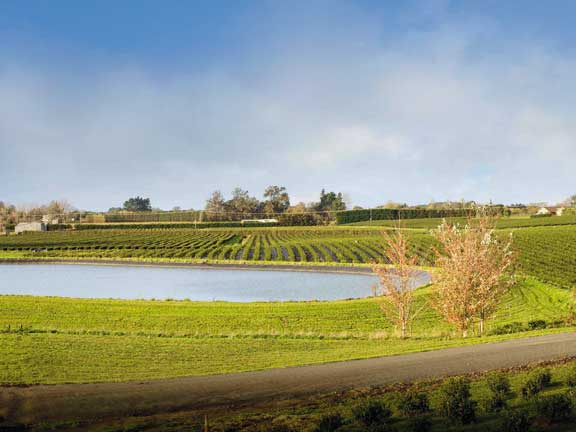 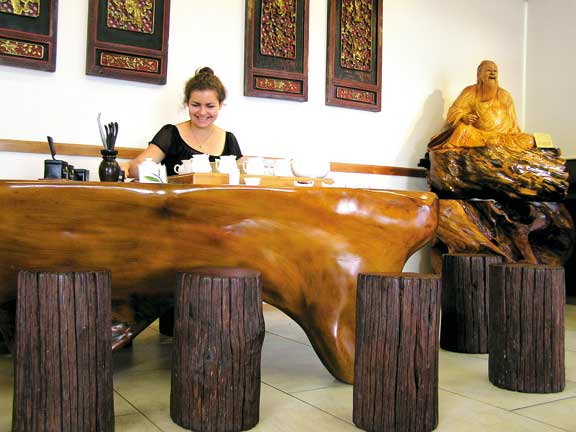 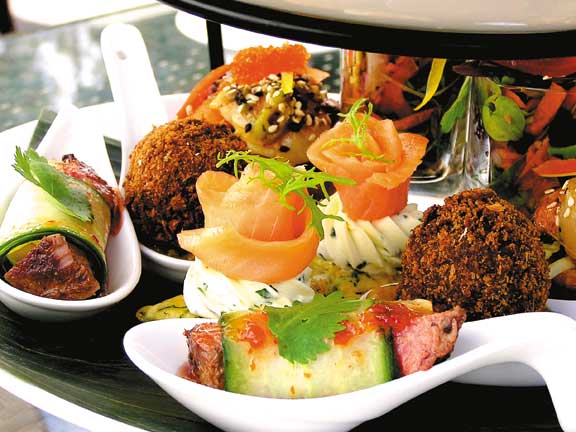 It's easy to linger at Zealong's stunning high tea 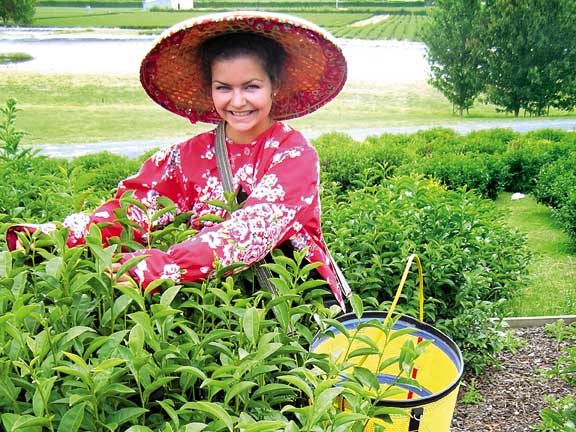 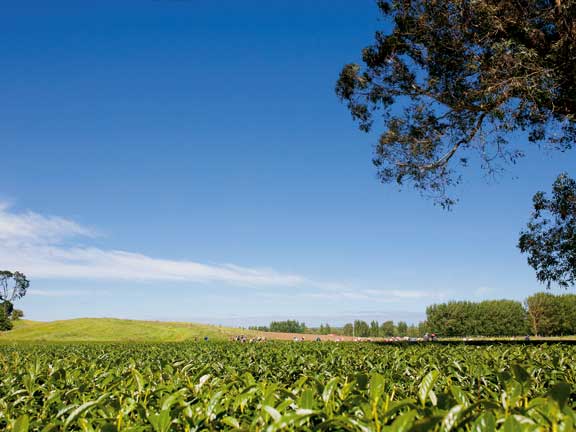 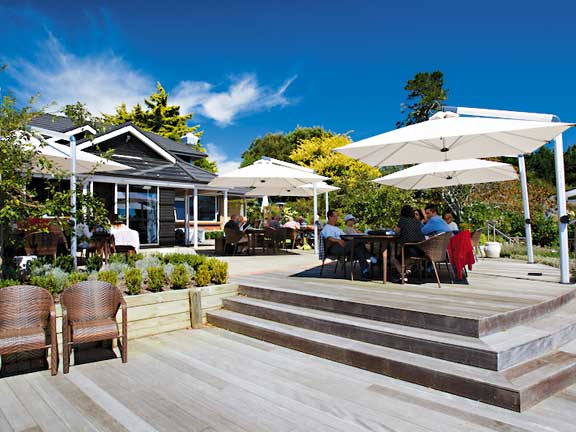 "First, sip with a small mouth, then, slurp it back like this," my tour guide, Sen, explains, sucking his tea noisily through a wide, vacuum cleaner-shaped grin.

I do my best, but after decades of hummingbird-sipping, it's hard to bully my mouth into the required whale-baleen shape. With each rowdy attempt I can't quite shake the image of my father frowning from the head of the dinner table.

Zealong Tea Estate, surrounded by rows of waist-high Camellia senensis (Chinese tea bush) plants in Gordonton, on the outskirts of Hamilton, may be a long way from Taiwan, but it has an exotic, other-worldly feel that makes me think of misty mountains and sleeping dragons.

"Do you know where tea comes from?" Sen asks at the start of my Discover Tea Experience – a 90-minute tour of the estate, culminating in a traditional Taiwanese tea ceremony and signature high tea. He explains: the Chinese emperor was sitting beneath a Camellia senensis tree one day when a leaf fell into his cup of hot water. A happy accident that sees me, centuries later, visiting the first and only commercial tea growing operation in New Zealand. The Estate, I learn, has its roots in the story of Tzu Chen, a Taiwanese immigrant intrigued by the thriving Camellia bush in his Hamilton neighbour's backyard.

"What do you do to make it grow so well?" he enquired and the neighbour laughed. Nothing, Camellia bushes grow like small children's feet in the Waikato, he said (or something to that effect), oblivious to the Eureka moment unfolding on the other side of the fence. If garden variety Camellia bushes are so at home here, perhaps the tea-making variety might happily hang a few photographs on the lounge room wall, too?

Keen to find out, Mr Chen and his son, Vincent, imported 1500 Camellia senensis cuttings from the mountains of Taiwan in 1996. Of these only 130 survived the stringent ten-month MAF quarantine process, but the Chen's were philosophical about the loss. The plants that made it were the strongest ones, the front-row-forwards of the plant world, ensuring a thick-thighed, hard as nails, future crop.

The next few years were a steep learning curve full of trial and error for the Chens but with the help of local horticulturalists, they had four-hectares of the plants thriving by 2003. In 2009, Zealong Tea Estate opened, and today the 48-hectare, organically-farmed estate is home to around 1.2-million tea bushes, producing up to 50 tonnes of oolong tea per year. Oolong, which translates to 'black dragon' in English, is a traditional Chinese tea. The name Zealong acknowledges the New Zealand variety's Kiwi roots.

We pass statues depicting the traditional oolong tea-making process – not too different, as it turns out, to the mix of modern technology and ancient skills employed at Zealong today.

In the first 20 days of November, January, and March the tender top three leaves of each stem are handpicked by workers, originally handpicked from Taiwan but now sourced locally too. Using razor blades taped to their fingers the best of the bunch can pick up to 80kg of soft green tips per day. In comparison, a beginner like me might manage a piddling 15kg – if I don't end up in hospital after accidentally wiping the sweat from my brow.

From there it's a race to the on-site factory where the leaves, which must be processed within 36 hours of picking, undergo a complicated withering, bruising, roasting, and rolling process, overseen by the Zealong Tea Estate's tea processing manager, Master Yu. A master blender with the kind of ancient expertise that can only be passed down through the generations, he knows when each unique batch of tea is ready by its aroma.

"You can't go and take a course and become qualified at this," Sen explains. "It takes years of learning from a very early age."

Yay! It's tasting time. There are four varieties of Zealong tea to choose from, Pure, Aromatic, Roasted, and Black – and I get to try them all. Deliciously swilly, aromatic, and all about taking the time to make and savour the perfect cup of tea, a traditional Taiwanese tea ceremony is a far sip from your usual roadside cuppa, I quickly realise.

First, the lightest Zealong tea, Pure, is poured into my cylindrical-shaped aroma cup. Next I'm instructed to roll the warm cup in my hands and breathe in its steam, which smells so alive I expect it might grow wings and flutter off. Once I've breathed in enough steam, I place my drinking saucer on top and flip it over quickly, transferring the liquid without spilling.

Sen, who is actually Zealong's international marketing manager turned tour guide for today, tells me earlier that selling Zealong tea internationally was a challenge at first because no one believed New Zealand could grow tea. Today its authentic taste and clean, green status has earned it a growing international respect. Zealong is purportedly the only ISO 22000 HACCP-certified tea company, making its tea the purest tea in the world but, says Sen, everyone overseas expects no less from a country like
New Zealand.

"The best way to isolate the different characteristics of each tea is in three sips," he says now. The first on the tip of the tongue, the second, the body of the tea, in the middle, and finally, the slurpy tail swallow at the end.

Once fully processed, each three-leafed tender tip resembles a small, hard ball, not much bigger than a pea. When infused in hot water the balls unfurl, releasing the tea's unique flavour. Each ball can be infused up to eight times, with each infusion slightly different in strength and flavour, so a tea ceremony can glide on for a long time.

At the end of ours, Zealong chef Brenton Hahn arrives with his signature high tea. Three tiers high, it's the Eiffel tower of high teas. You could probably take guided walks to the top. Black tea-scented rice with baby peas and creamy feta enclosed in a panko crumb. Marinated scallops finished with tobiko, served atop a light French toast. Buttery tea-filled macarons. Tea and almond tart finished with a passionfruit glaze. And my favourite – Zealong tea and vanilla bean panacotta topped with a raspberry jelly.

Sen says Zealong Tea Estate prides itself on being a place of Zen, where taking the time to enjoy and savour the Zealong experience is more important than the turnover of tables. Some guests stay and slurp tea all day. With this in mind and a never-ending Z cup full of black tea, I sit down to tackle my three-tiered treat. It's just lucky there's nowhere else I urgently need to be.

For the latest reviews, subscribe to our Motorhomes, Caravans & Destinations magazine here.