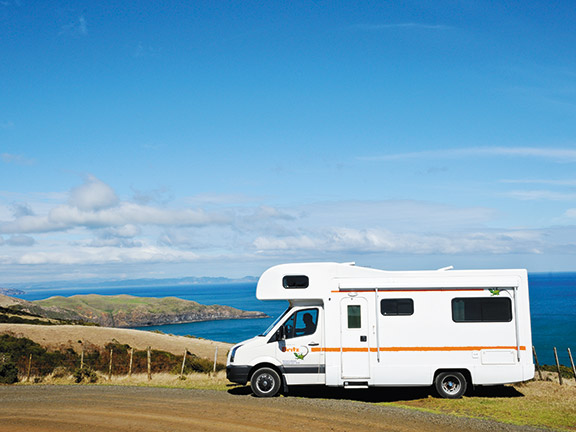 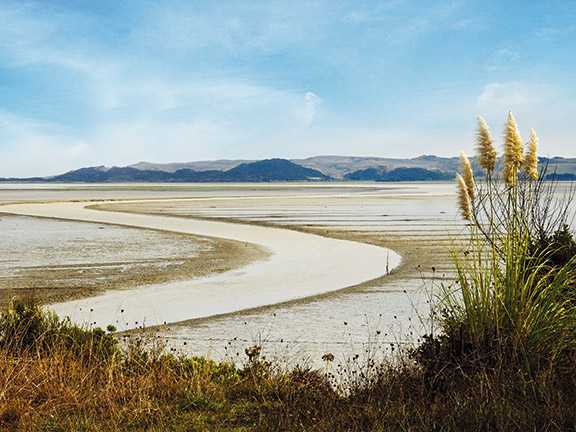 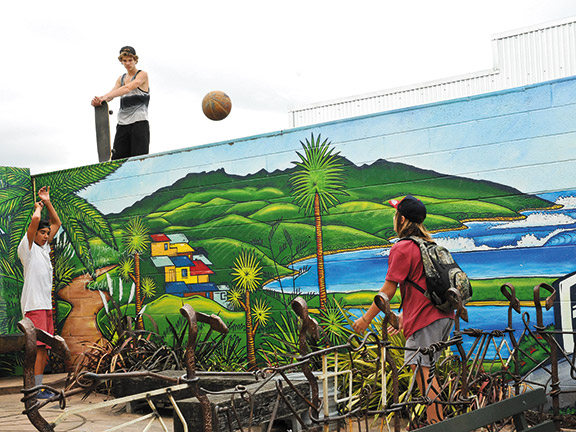 Art and street culture thrive in Raglan, and skateboards are omnipresent. Shorebirds proliferate on both Kawhia and Aotea Harbours. 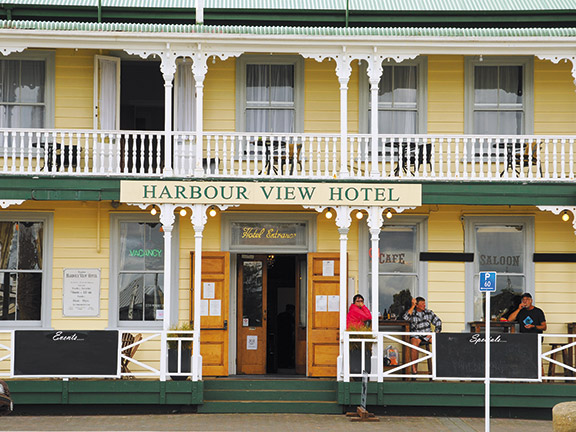 Raglan's Victorian hotel has pride of place in the middle of town. 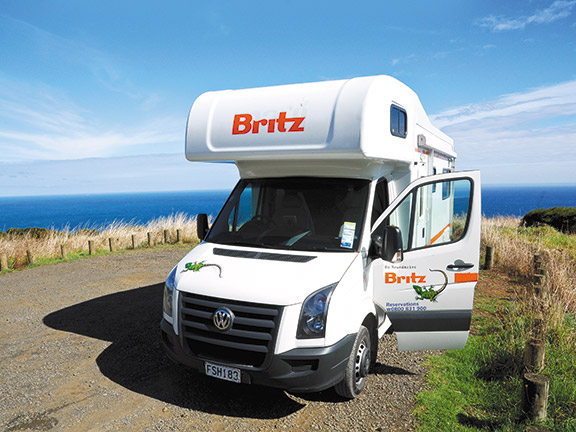 Big Britz proudly poses during her no boundaries journey behind Mt Karioi.

'No boundaries' is the moniker on the doors of our motorhome, along with the Britz logo and a picture of a wriggly lizard. Is that a challenge, we wondered?

Trundling down State Highway One from Auckland to Waitomo in our seven-metre motorhome, the journey is so smooth we don't even get the pots rattling. On day one, the most challenging activity is reversing 'Big Britz' into the berth at the Waitomo Top Ten Holiday Park.

We've been warned some of the back roads to Raglan, around Aotea Harbour and the west side of Mt Karioi, are small, winding, and gravelly, so if Big Britz can take us comfortably over this less-travelled route, then her 'no boundaries' claim will get a big tick from us.

State Highway 31, from Otorohanga to Kawhia, is a sealed doddle with lush, green, gorgeous King Country farmland rolling along the road sides and silvery glimpses of Kawhia Harbour.

The main street of Kawhia has just one parked car and no pedestrians. There is an old-style hotel, a café, a general store, and a couple of other shops that don't seem to be open. It's a cute town. We park Big Britz on the harbourfront, near a visitor information centre and museum (both of which are closed) and take a stroll. There is a fishing boat at the wharf and a few dinghies pulled up on black sand. The harbour felt isolated and forgotten, but it's only 55 minutes' drive from Otorohanga and an hour and 20 minutes from Hamilton. Why more people don't live here is a mystery.

We backtrack a few kilometres and turn north into Kawhia Road, which skirts around Aotea Harbour and on to Waireinga/Bridal Veil Falls. This puts Big Britz through her paces — a gravel road with corrugations and, yes, the pots are rattling. This is wild country with steep hills, rugged farms, and native forest in valleys.

Aotea Harbour is edged with sedge, toi toi, and other golden marsh grasses. Shorebirds feast on its fecund mud flats and, in the distance, massive and inaccessible sand hills guard the northern side of the harbour mouth.

Waireinga/Bridal Veil Falls, the top of which is a ten-minute walk from the road, plummets over a basalt lip for 55 metres, into an amphitheatre it has created during the last two million years. Three lads have carried round rocks from the bottom of the falls, up 300 steps, to the lookout at the top, from which they gleefully heave the rocks back into the pool at the bottom and cheer at the size of the splashes. Then they scamper off, back down the steps, to do it all again.

The amphitheatre and the constant moisture from the falls creates a gorgeous, green microclimate in which many varieties of fern and nikau palms thrive. There are waypoints along the 300 steps and I stop to view the falls through a frame of filmy, ferny greenery. The falls look more impressive from below — 55 metres is about the height of an 18-storey building.

It's only 20 minutes to Raglan via the sedate, sealed road, or two hours by the skinny, windy, gravel road around the west side of Mt Karioi. Big Britz has no boundaries and Sam is happy driving, so we head to the coast and the famous surf beach of Ruapuke.

Young folk, who have hauled their backpacks from Europe and America, and brought beat-up cars in Auckland and driven this treacherous road from Raglan to Ruapuke, are bemused. The legendary west coast surf hasn’t bothered to turn up.

It's an impressive beach, though — its dark-sand vastness, deserted by people except for the disappointed surfers at the road end and, on this blue day, it has an unforgettable, primeval beauty.

Big Britz crawls along the bush-covered skirts of Mt Karioi. It's an ancient volcano on the edge of the ocean and has been a true test for the road-builders. The road is, at times, not much wider than Big Britz but luckily the word in Raglan is there is no surf at Ruapuke Beach, so we don't have to deal with the on-coming cars with enthusiastic surfers. Te Toto Gorge is the most impressive of the viewing spots. Here one can stand on a Department of Conservation viewing platform perched on and over the edge of a 150-metre cliff. Eons of blue ocean and sky and a vast green valley far below make this slightly scary for those of us who remember Cave Creek.

Mt Karioi is 2.4 million years old, a sign tells me, and Te Toto Gorge is made from 15 layers of black basalt lava-flows. Abel Tasman mentioned Karioi in his diary when he sailed past in 1642, James Cook also mentioned it and its fine forest, when he passed in 1770 and the entire mountain, 5000 hectares, was bought from the local Maori for Queen Victoria in 1854, for £575.

By the late afternoon, Big Britz is contentedly parked in Raglan Kopua Holiday Park. Yes, she deserves her 'no boundaries' moniker — small, curling, gravel roads are nothing to her and, despite what feels like a full day of road adventure, the diesel gauge still stands tall.

Raglan has a buzz that is part heritage, part greenie (there are numerous 'no drilling in our ocean' signs prominently displayed), part international-backpacker and part old-hippie. And I love it. There are plenty of cafés; crafty souvenir shops; surf shops and frock shops selling funky vintage; Balinese crossed with Hari Krishna; and locally-designed cheap-and-casual.

Sam and I wander to the harbour edge. The sun is tucked behind low-horizon clouds, pretty enough because it trims them with gold lace, but nature's real miracle is the light show that fills the sky. The clouds, wispy in long bands, are the colour of honey. Within minutes they turn peach, then pink and finally scarlet against inky blue. It's a halleluiah moment at the end of a long and lovely day.