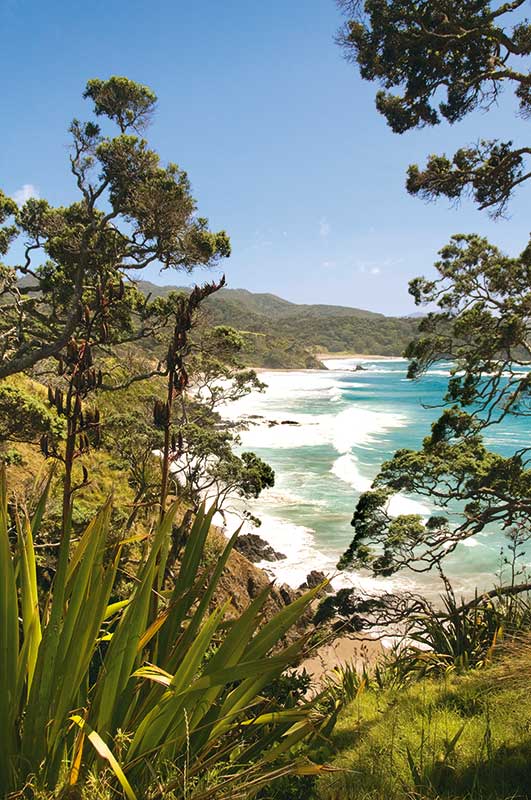 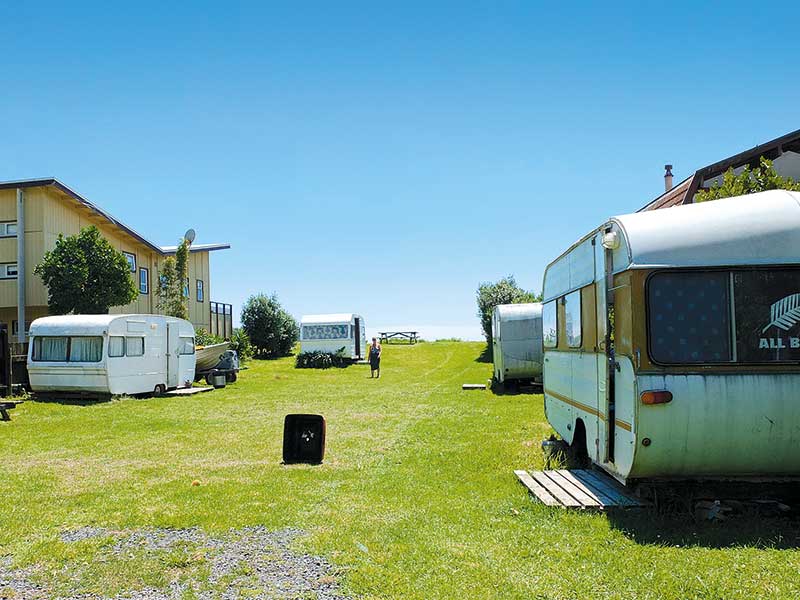 This article is about the part of Northland’s east coast that stretches from Mimiwhangata to Russell.

We climbed into the high hills above Helena Bay to find one of the most fascinating aspects of this coastal route. Almost tipping off the side of a cliff perches the Helena Cafe and Art Gallery. On the open-air verandah we gratefully guzzled some very fine coffee and absorbed the eagle’s-eye view over fern-cluttered hills to the distant bay.

In his 10-hectare property, ex-dairy farmer, Peter Browning, has created a magnificent garden of tropical and indigenous plantings encircling a rocky pond and showcasing an assortment of eye-catching statutory. In a gorilla assault of the ears, a population of Jeremy Fisher’s camping among the ferns and lily pads claimed this watery territory.

But it’s the gallery that will take up most of your time here. It must be one of the most comprehensive in the country. Five rooms are packed with attention grabbing, exquisitely executed furniture, ceramics, paintings, photography, glass, tiling, jewellery and outdoor sculpture. Of course I did not leave empty handed.

We wound down the road to Helena Beach where a small curve of dark sand abuts a swampy valley. There is no campground here but two or three kilometres back, we’d spotted a paddock where motorhomes and caravans were parked for $20 a night.

The road south from Helena leads to Teal Bay, where a quiet sea was flopping neatly against tawny sand and brightly coloured beach towels hung like flags from a row of tidy baches.

Propelled by curiosity and the need for adventure, we drove on. Nine kilometres along a narrow, twisting, metal road took us over the hills towards a great bite out of the land known as Mimiwhangata. On the map it looked as if it were slung between two arthritic thumbs.

Eight-hundred hectares of hinterland comprise the DOC-run Mimiwhangata Farm Park. It’s a wild part of the world where farm tracks provide pedestrian access to a variety of sheltered and open-ocean beaches. On one of them is a very good campground but unfortunately not for us as it can only be reached on Shanks’s pony. Unless you have camping equipment these lovely wild beaches are a day trip for those of us in RVs. We thought the park was well worth the drive but I must add a word about the road. It’s not for the faint-hearted motorhome driver.

Travelling north from Helena Bay on the Old Russell Road, the next turn off is to Oakura Bay. The waves that slide in along Oakura’s extensive beach looked exhausted. So did the holiday makers that lolled around on the sand and grass by the hundreds. The destination is obviously popular.

Further north, another side road wanders off down the length of the Whangaruru Peninsula – a fat digit of hilly terrain with the open ocean on one side and a sheltered harbour on the other. Past Bland Bay Campground, at the tip of the peninsula, is a grassy DOC camp where there is not much beach but great fishing in the calm waters of the harbour.

Back on the Old Russell Road, the route bifurcates and the left-hand arm takes a shortcut across country. It’s unsealed narrow and twisty. We drove this section in the motorhome a few years ago and there was some lovely bush and mature kauri trees along the way that made it worthwhile.

We detoured to the Rawhiti Peninsula that pokes a slender nose to the north and at its tip, overlooks the Albert Channel and Urupukapuka Island. Along its length are six bays; tranquil, deep and lined with pine trees and holiday homes.

There are more swampy lands toward Russell. These comprise vast inlets crammed with mangroves. Man o’ War Swamp is probably the largest and then Frenchman’s Swamp. Before the swamps, a sign on the left points to the Ngaiotonga Kauri Forest. We’d run out of time to check it out but reportedly there is a lovely short walk through groves of mature kauri.

Past the mangrove swamps the tip of the harbour swung into view, pewter grey in colour and only the spikey racks of oyster farms breaking the water’s surface.

Soon the Old Russell Road meets the ‘new’ Russell Road and with that our coastal exploration was at an end. We drove into Russell to devour a belated serving of fish and chips at the Swordfish Club, and then back-tracked to catch the car ferry to Opua.