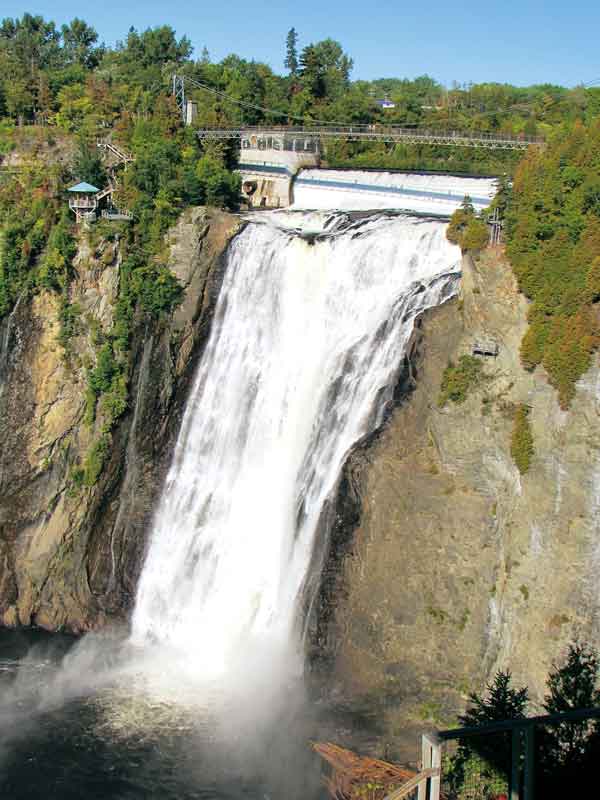 View of the St Lawrence River near Quebec Manitoulin Island on the Cup and Saucer Trail A French-style cafe in Montreal As we drove our rented campervan through places such as Algonquin National Park, each bend in the road brought new wonders; the leaves on the trees varied from vivid red and dark maroon through different shades of orange to bright yellow.

The trees lined the roadsides, climbed the hills, and were reflected in the many lakes scattered across the region. The effect was stunning. It wasn’t hard to fall for Canada.

Our campervan was a 7.3-metre Four Winds design, which we picked up near Toronto. We spent three weeks exploring Ontario and Quebec provinces, discovering small towns and vibrant cities, visiting islands, marvelling at waterfalls and being delighted and awed by the wildlife.

High on our list of must-sees was Niagara Falls. This famous destination is made up of three waterfalls: Horseshoe, American, and Bridal Veil, with Horseshoe being the most spectacular. Niagara Falls forms the border between Ontario, Canada and New York, US and is best viewed from the Canadian side. We had great views from the street level promenade but you can also take a boat up the river to view the waterfall from below.

The sheer volume of water pouring over the falls was breathtaking. The town of Niagara Falls itself was a mini Las Vegas, full of tourist attractions but worth visiting at night simply to see the falls lit up with floodlights. Lakes Ontario, Erie, and Huron border the mostly flat farmland around Toronto. We visited pretty settlements at Niagara-On-The-Lake, Port Stanley, Bayfield, and Collingwood, all of which nestle on the lakesides. These little towns were full of boutique stores, interesting shops, and locally owned cafes and restaurants.

Inland, many of the towns were on antique or foodie trails. At tiny St Jacobs, we discovered that a sizeable number of the local population are Mennonites. This religious group still keeps the dress and transportation styles of the 19th century, fearing new inventions will destroy the values of simple living they uphold.

Horses and carriages are a common sight in the area, with supermarket carparks having hitching posts. We watched a large group of Mennonite men playing a ball game one day, while their black-clad womenfolk watched from the sidelines. After driving further north along the Bruce Peninsula, we took the vehicle ferry to Manitoulin Island. This two-hour trip was across a lake so vast that I forgot for a moment it wasn’t the ocean and wondered if we’d see dolphins.

Manitoulin is the largest freshwater lake island in the world and has three large lakes of its own, which have islands in them. We looked out on this mix of water and thickly forested hills from a viewpoint on the Cup and Saucer trail, which we walked the following day. We were constantly marvelling at the views, especially where those autumn-coloured trees reflected on the lake surface. The campgrounds we stayed at in this area all warned campers to be on the lookout for bears, and I had been rather nervous on our walks (there are also snakes, disease-carrying ticks, and poison ivy to watch for).

Nevertheless, it came as a surprise when we rounded a bend on a remote road and saw one ahead of us. Black bears grow to over two metres in height and can weigh around 200kg, so we were glad we were inside the car. The bear hung around on the road for a few minutes before disappearing into the trees. We felt blessed to have had the chance to see it.

Ottawa, Canada’s capital, is a beautiful city. Parliament Hill was our first stop and we wandered around admiring the Victorian architecture.

Nearby, we discovered Bytown Locks on the Rideau Canal where we enjoyed a coffee outside the old stone warehouse, now a museum. Towering above us was the Château Laurier built in 1909.

This impressive hotel has 429 guest rooms and features Tiffany stained-glass windows, an empire-style ballroom, a gold and cream drawing room, and photographs of the rich and famous taken by portrait photographer Yousuf Karsh, who lived at the château for 18 years.

A walk around history Another city we loved was Québec, especially the old town area, which dates back to the early 1600s. The old cobbled streets encouraged us to explore, as there were hidden squares around corners and pavement cafes, French style.

Just northeast of Québec City, we drove across a bridge to the quiet Íle d’Orléans where we took the road that circles the island. The Íle d’Orléans is known as the ‘Garden of Québec’ and there were fruit stalls galore at the roadsides and, being autumn, pumpkins for sale at the vegetable stores.

Sugar shacks advertised maple syrup for sale but it was a ciderie that attracted our attention, and we were irresistibly drawn in to sample the different varieties of cider the Domaine Steinbach produced. After backtracking and visiting Montreal (another nice city), we re-entered Ontario and followed the St Lawrence River to Gananoque where we booked a cruise through the Thousand Islands. This archipelago has nearly 2000 islands, ranging in size from 100sqm to those that are little more than rocks.

To qualify as an island here, it must have at least two living trees. Many of the islands boasted a single dwelling; others were linked by little bridges to each other. Perhaps the most photographed was Heart Island, home to Boldt Castle, where visitors can tour the fairyland castle if they have a visa for the US (it is in American waters).

Our three weeks in the campervan were almost over, but before returning to Toronto, we visited Sainte-Marie among the Hurons, near Midland. This is a recreated settlement on the site of the Jesuit settlement of 1639–1649. This was the first European community to settle in what was then called New France. Jesuits and lay workers built a fenced community that sheltered a church, barracks, workshops, homes, and areas for the Huron Wendat people. It was fascinating to learn about the lives of these men who were devoted to bringing their religion to the native population.

Locals dressed as settlers and Hurons of the time were on hand to answer questions. One young man, working as a blacksmith in the recreated smithy told us he longs to visit New Zealand.

As for us, we had come to the end of an amazing trip through Ontario and Quebec, and we certainly fell in love with this part of the world.