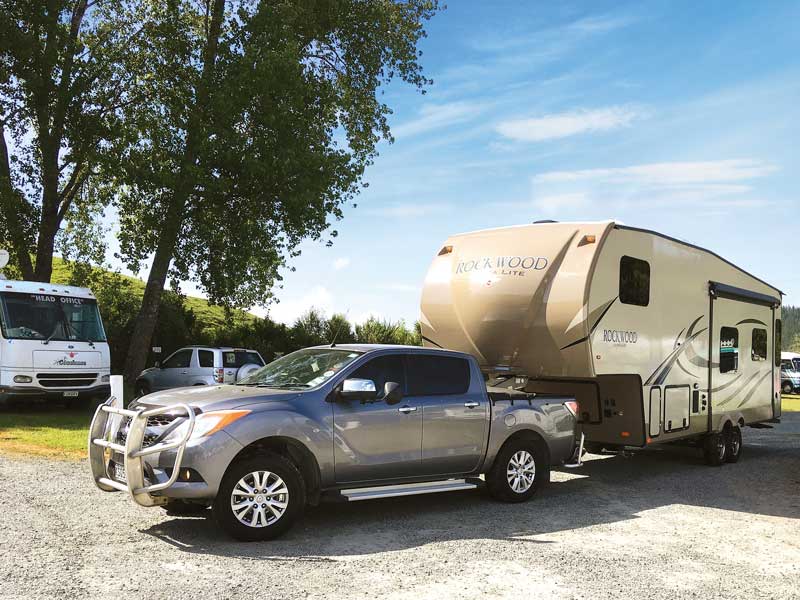 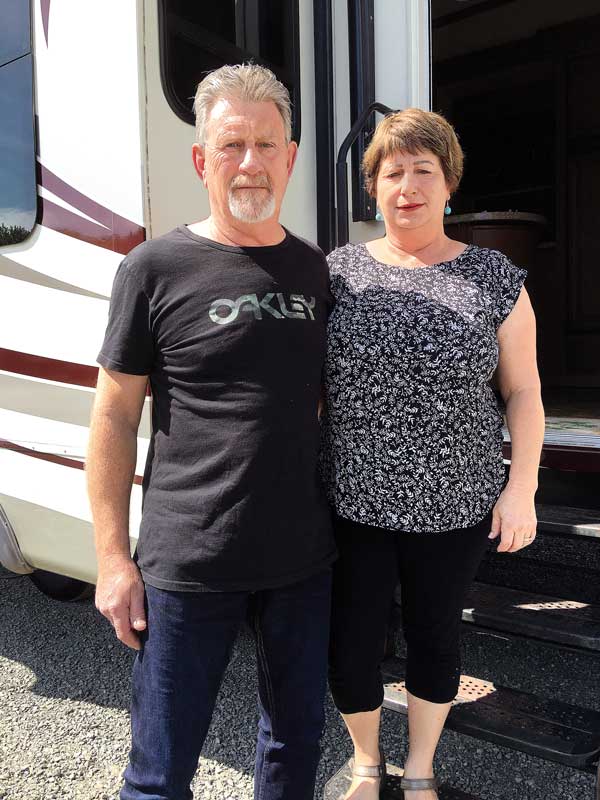 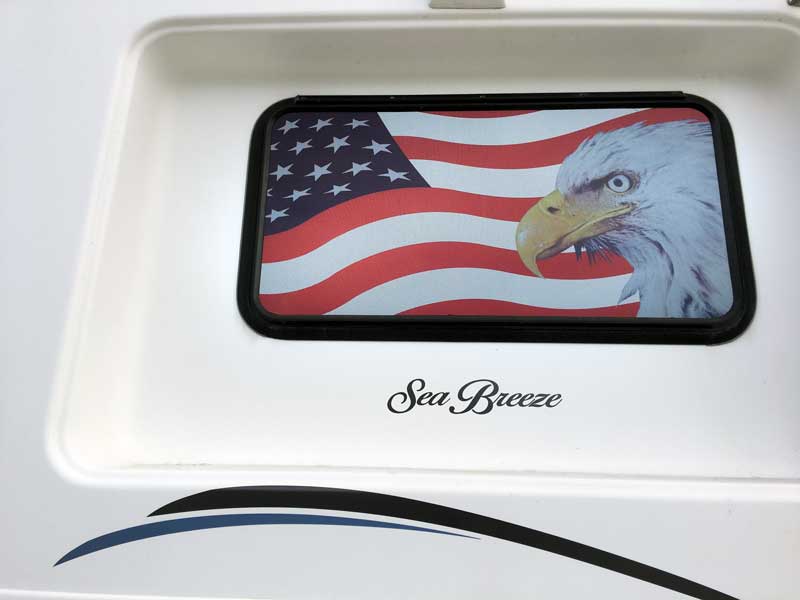 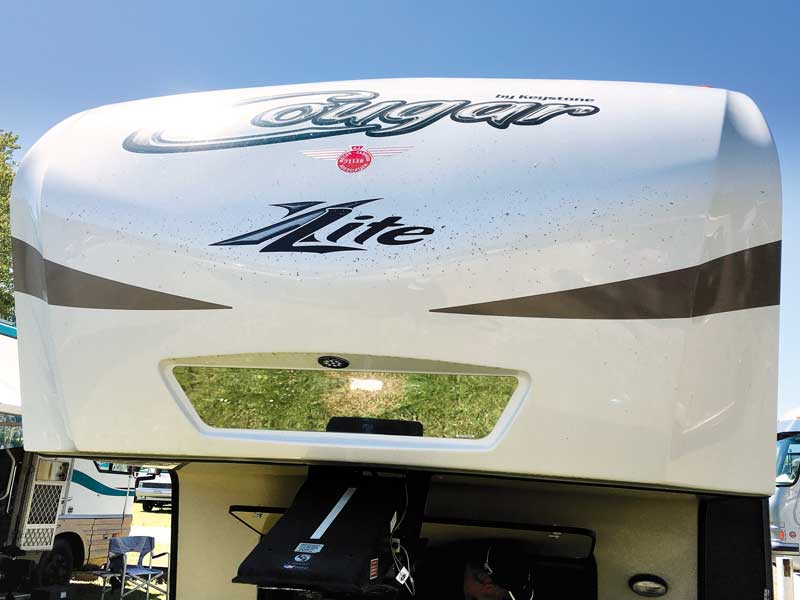 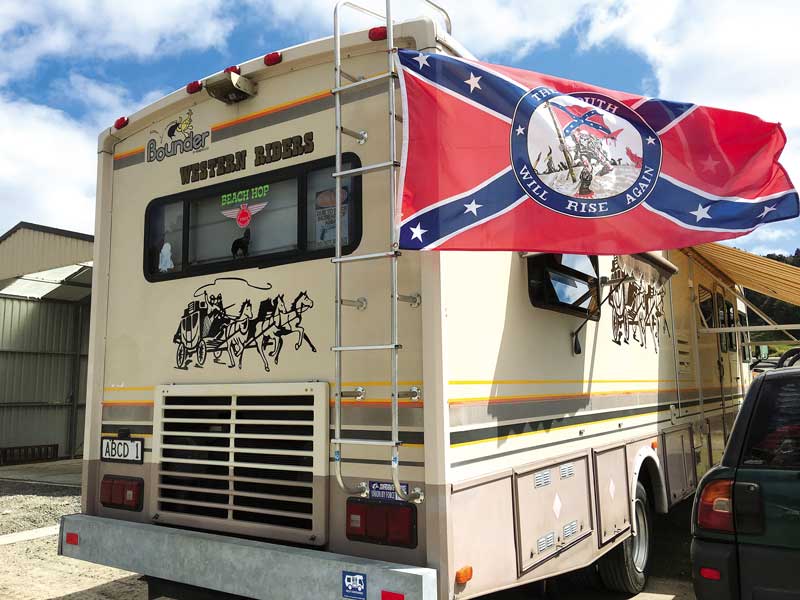 A bomber disguised as a bus On a cool sunny afternoon, I watched in awe as 70 RVs of generous proportions lumbered into the grounds of the Paradise Valley Speedway and settled into position side by side. None of them were under 30-feet long. Racing was obviously not on the agenda.

It was Labour Weekend and owners of motorhomes and fifth wheels had gathered near Rotorua for the 10th  American RV Group Event to be held in New Zealand. They were drawn here by the camaraderie of a common interest and to catch up on the stories their lifestyle engenders.

“When you own an American motorhome, the journey begins well before you hit the road; before you’ve even bought the vehicle,” said Brian Service, who, with his wife Enid, has a long story to tell about the retro Revcon bus they imported, stripped, restored, and now live in full time.

The rally paraded a collection of motorhomes and fifth wheels (fivers) that were unfamiliar (to me) but impressive in their dimensions and eye-catching appeal.

Their names reflected their bold profiles and hinted at their origins—Cougar, Big Country, Country Star, Serrano, Rockwood Windjammer, Coachman, Winnebago Vectra, and Heartland. And behind every one of those behemoths was a backstory of equal intrigue.

As soon as his stays were down, our caravanning mate, Chris O’Brien galloped off around the Americans and came back full of wonder. “They’re amazing,” he said.” Have you seen the Landmark? It’s enormous!” I hadn’t of course, but, propelled by his enthusiasm, I headed off on my own inspection.

Keeping up with the Joneses

The fiver Heartland Landmark was indeed a wonder. Forty-two feet in length, it weighs nine tonnes and has four slide outs. The owners, Paul and Denise Jones, may well own the largest rig in the country.

The Landmark is pulled by a 6.7-tonne, 4x2, DAF tractor unit, and behind the cab, Paul has built a steel platform that accommodates the couple’s smart car. The platform tilts and is joined to a ramp so the car can be unloaded using an electric winch.

All up, the rig is 65 feet in length, an intimidating combination to haul along the roads, but not for Paul, who, as part of the couple’s dental supply business, locates large dental units around the country.

The Joneses started this adventure years ago, travelling from New York to LA in a Wild Cat fiver and later around Canada in a Ford Winnebago. Both have an affinity with things American. The Landmark was found online, bought sight unseen, and shipped to New Zealand from Toronto. Paul and Denise are not permanently on the road but when they are, they’re hard to miss.

Taking on the big wheels

Parked alongside was an older 32-foot National Seabreeze motorhome built in 2000. Karen Lloyd, who is a nurse, bought it five years ago when she returned from working in outback Australia. And although she has a permanent place in Tauranga that she parks up at when she’s not on the road, she loves the RV lifestyle.

“I’ve always been a bit of a gypsy,” she said. “And when I came back here, I was homeless. My brother already owned a motorhome, and he suggested it could be a good solution for me. I liked the idea, and, ignoring other people’s comments that I couldn’t do it, I started looking around. When I saw the Seabreeze, that was it. I loved it. But I didn’t have an HT licence so that was the first thing I had to do.

“Even though I had heaps of driving training, the day I set off on my own, with my two Birman cats locked in the bedroom, was still really nerve-racking. It was all a big learning curve but I quickly gained confidence, not just with the driving but with all the other things you need to know to operate a motorhome of this size.

“It amuses me that so many men still doubt I can handle everything on my own. But I do and hope I encourage other single women to take it on too.”

With American RVs, the Winnebago brand features probably more than any other. Rob and Bev Wallace are definite fans. They’d been boaties for 30 years, and then one day, Bev spotted an American RV and was invited inside to look. Two hours later, she emerged, determined to see New Zealand from the land instead of the sea.

Rob started researching. Despite the risk of importing his own, he thought he’d give it a go. A lot of research came up with a good possibility—a Pace Arrow in Orlando. On New Year’s Eve 2007, Rob caught a flight to Florida.

He flew home empty-handed. More research came up with another possibility; this time, a Winnebago Vectra in Tampa. The couple flew to Florida again, met the previous owners, and inspected the goods. It ticked all the boxes.

“I’m of Scottish descent and wasn’t keen to pay sales tax in Florida and then GST in New Zealand,” Rob said. “The dealer organised a retired couple to drive the RV across the Florida State line into Georgia and have the sale notarised there.

"Then they unhitched their car from the Vectra and drove back to Florida and in proud possession, we drove across the States to LA. For the last 10 years, converting and upgrading the Vectra has been my project and I’m just about finished.”

Jack Hedger and Maria Muzinska also have a Vectra Winnebago they live in permanently. When Jack’s marriage ended eight years ago, he bought an English caravan instead of a house. It was disappointing and he changed it for an American caravan.

But it was a motorhome he really wanted. He and Maria began the search. For a year, they travelled around the North Island sussing out motorhomes but there was nothing that said ‘buy me’! Then a year ago, they looked through an American RV and the hunt was on!

“At Simpsons Beach, a couple mentioned that their workmate had a Winnebago Vectra that might be for sale,” Jack said. He’d used one in the US, then imported to New Zealand, and converted it.

“Unannounced, we visited even though it wasn’t on the market. It was meticulously and tastefully refurbished inside and in showroom condition. At that stage, owners Colin and Maree Adams were not quite ready to sell but we waited and have now owned this lovely American RV for three months. There is little I would change.

“We don’t plan far ahead, but one thing is on the cards, we will be back at next year’s American RV event.”

Alongside these giants, our seven-metre Geist caravan was Lilliputian; nor in the strictest sense is it American in origin. However, since it was manufactured by the Hymer group, which is now owned by the grand master of RV manufacturing, (the American company Thor) we considered the Geist to be, very loosely, an adopted American for the occasion. I’m not sure if anyone else went along with that.

In another sense, we were definitely adopted. Everybody at the event gathered us into the fold as if we were old friends. We would rather like things to stay that way.